The exhibition “Tim Burton – The Animation Puppets is a tribute to some of the animation movies created by this American director.

Tim Burton started his career at Disney as an animator and is today one of the world’s best known film directors, with over 20 movies in live action and stop-motion and 3D animation.

This exhition will show the original drawings and puppets used in Tim Burton’s movies, as well as some models, drafts and character studies used in the production of Mars Attaks! (1996), Corpse Bride (2005) and Frankenweenie (2012). The Portuguese public will have the chance to see firsthand the uncanny elements that were part of the creative process of some of Tim Burton’s gothic take on storytelling for children.

“We are showing the works of one of the most brilliant directors ever. He started his career when he was still an Animation student and his love and drive for animation still runs in his veins, as it does in our veins. This puppetry work is overwhelming! Each puppet is a watchmaker masterpiece. We will be able to see the mechanisms used to animate their heads, their bodies, and finally grasp that inside every image we see on screen there’s a highly complex structure allowing the animation artists to give each “actor” his or her most complex expressions and movements.” Fernando Galrito, MONSTRA’s Artistic Director.

The puppets in display at this exhibition were produced by the British studio Mackinnon & Saunders.

The exhibition “Tim Burton – The Animation Puppets”  is co-produced by the Museu da Marioneta and MONSTRA – Lisbon Animation Festival. 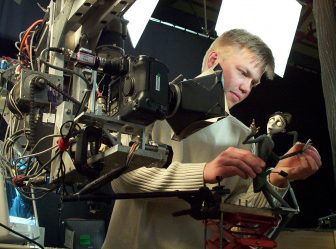 Mackinnon & Saunders is a world leader in character development for stop motion puppets.  The company also produces high quality animation in its studios near Manchester.

The company also provided support services to the puppet department at US-based Laika Studios on feature films Coraline, ParaNorman and The Boxtrolls and to Wes Anderson’s London-based puppet department for Isle of Dogs.

Audience
Families | For all
Price
2 € / person

Discounts:
Half-price if ticket to the museum is also purchased
Free for children up to 5 years old (inclusive)